When alcohol has a hold of you and the disease is progressing faster than you can pour your next drink, your life becomes a web of negative thinking with no hope for the future. You accept the fact that you are an alcoholic and that you’re “okay” with being one for the rest of your life. Brushing off the legal issues, fines, and loss of relationships is an everyday occurrence. My alcohol use Intensified from the age of 19 to 26. I became so dependent on this substance that even answering the phone when anybody called seemed impossible unless I was under the influence. The many nights of drinking and driving and blacking out every night was a normal thing for me. Drinking on the job, at family events, and at school (before I got kicked out three different times) I was under the influence. Depression increased, as well as, anxious feelings. My mind became so ill to the point where suicide was an option that I was contemplating and weakly attempted. A cry for help. Recovery was something I could never imagine. I accepted the fact that I would never own a home, have a career, graduate from college, meet somebody special, and start a family. The day my mom and sister came to me concerning their worries about my alcohol use, I had hit a threshold. 10/10/10 was the date I was re-born. The first couple of years weren’t easy, I’d be lying if I stated they were. It was a time for me to “re-learn” all the things I had become dependent on alcohol for (such as answering the phone, going out in public, and communicating). After that, I began to see potential in myself. My confidence began to grow. I applied to the University of Northern Iowa in hopes that they would give me one more opportunity. They accepted my application but I would have to be placed on probation. I am grateful for Northern Iowa giving me that opportunity. I received a scholarship, got on the dean’s list, and graduated with a B.A. in Psychology in 2017. Once I started college again, I knew exactly what my goal was, and that was to become a drug counselor and help others in need. I did all the requirements that were necessary to get certified in the state of Iowa. I got hired at UnityPoint Health as a Certified Alcohol and Drug Counselor in Muscatine, Iowa. Again, grateful for them taking a risk with me and giving me the opportunity. They taught me a lot, but I need to learn more about the science behind addiction. I took my chances and applied for graduate school at the University of South Dakota. I am also the chairman of the graduate committee for the American Counseling Association of Iowa. Beyond my wildest dreams, I got accepted and I am now pursuing my Master’s degree in Addiction Studies. Nine years ago I had accepted this thought of not getting anywhere in life and simply being an alcoholic until the day I died. Today, that dream of owning a home, having a career, getting a degree, meeting somebody I would grow to love, starting a family, and becoming a dad wasn’t only possible, it became a reality. It all began when my mom and sister saved my life on that October evening and I am forever grateful. That’s just it, if you want to live a clean and sober life, it’s important to learn how to be grateful, to be patient, and to feel emotions you would normally stuff down. Recovery is possible for anybody. How do I know this? Because I gave recovery a chance. 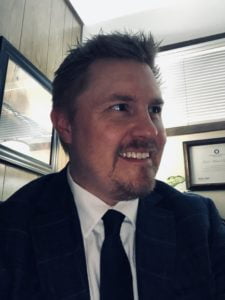