I became a person with a substance abuse disorder when I was 14-16. It didn’t get bad until I was 18. I started doing anything and everything. When I was 22 I was brutally raped and left for dead. I somehow called my mom and survived. I got into recovery then and stayed in recovery until around 2013. I started getting high again and hanging with the wrong crowd. I got pregnant with my 4th child and continued to use throughout the pregnancy. When she was born she tested positive and my boyfriend at the time was very abusive. All 4 of my daughters were removed on 4/2/2014. It was one of the worst days of my life. It was also my oldest daughter’s birthday. I overdosed a few times and lost all 4 of them for good. My oldest went to her father and stepmom, my second went to her dad down in Key West, my third went to her dad and my fourth got adopted by my parents. She still doesn’t know I’m her mom and it’s been almost 7 years. I had a son in 2015 that was also born positive for substances. He was removed at 21 days old and placed in foster care. I relapsed and overdosed on April 6, 2016. I decided to go to rehab. I entered rehab on June 9, 2016. I fought for my son and stayed in rehab for 15-16 months. On September 1, 2017, I got my own apartment. I had worked my case plan and stayed in recovery and learned how to care for my son by attending all his therapy appointments. I had a TPR trial on September 25, 2017. I wasn’t supposed to win. I listened to every testimony and cried when my son’s foster mom said she didn’t think I could parent a child with his needs and stay in recovery. Well, the judge thought differently. He granted reunification and we worked out a month-long transition plan. A month wasn’t bad compared to the two years I had just spent fighting for him. So on October 23, 2017, my son came home for good. Shortly after that, my daughter Anistyn came home and she’s still with me. She will be 8 in October. Last year, 2019, my daughter Angelique came to stay for the summer and she saw that I was doing better and she told her dad she was staying with me. So she moved in and she’s still with me. She just turned 12 in July of this year. My oldest Alexa is 13. She still hasn’t come home and I don’t get to see her. I’m currently writing my motion for reunification and hopefully, she will be home soon. My son will be 5 in November. His name is August. He is doing so well. He’s growing and thriving and in a private school in pre-K. My daughter Ashlynne is 6 and she’s adopted. I’m not allowed to have a relationship with her but one day she will know who I am and I hope she wants to get to know me. My parents still don’t really come around and they never get my son or acknowledge us. I work for Big Bend Community Based Care as the administrative assistant and background specialist for the foster family support team. I’ve been there for almost 2 years. I am a recovery peer support specialist and I’m currently in college for my BA in psychology with a concentration in human services. So if I can accomplish all of this then I can help others accomplish it as well. 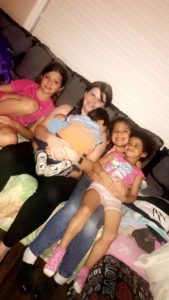