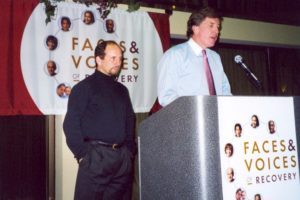 I was invited in 2000 to do a presentation for the Center for Substance Abuse Treatment Recovery Community Support Program grantees meeting. I chose for my topic “Toward a New Recovery Advocacy Movement” and prepared a paper to share with attendees that constituted one of the first descriptions of the rise of grassroots recovery advocacy organizations at the dawn of the new millennium. That paper included the rationale for a new recovery advocacy movement and offered historical lessons and principles that might guide this fledgling movement. Below are some excerpts from that first paper, delivered almost 20 years ago, that readers may still find of interest.

Call to Action: It is time for a recovery movement.  The central message of this new movement is not that “alcoholism is a disease” or that “treatment works” but rather that permanent recovery from alcohol and other drug-related problems is not only possible but a reality in the lives of hundreds of thousands of individuals and families….In our enduring debate over whether the roots of addiction lie in the medical arena (a problem of susceptibility) or the moral arena (a problem of culpability), we have lost touch with real solutions to addiction, the evidence of which is in the transformed lives of recovering and recovered people across America…. It is time we (the remnants of the existing alcoholism/treatment movements) redirected our energies from an emphasis on pathology to an emphasis on resilience and recovery.

Treatment versus Recovery Interests: Treatment is best considered, not as the first line of response to addiction, but a final safety net to help heal the community’s most incapacitated members.  The first avenue for problem resolution should be structures that are natural, local, non-hierarchical and non-commercialized.  The interests and agendas of the recovery community and the treatment field overlap but are not the same….Professionally-directed treatment services are not the same as the broader umbrella of recovery support services.  Indigenous people who lack professional training should not be involved in the former, while the latter may be best designed and delivered by the recovery community.  Those providing treatment services and those providing recovery support services play different but complementary roles in the long-term recovery process.

Movement Structure: Co-mingling mutual aid and policy advocacy functions usually creates an organization that will either perform both functions poorly or sacrifice one function for the other. It is usually best to separate the service functions of mutual support, professionally-directed treatment, and social policy advocacy into separate agencies (or at least separate organizational units), but there are exceptions to this rule..…For a besieged people (community), personal recovery may be inseparable from the broader issues of social policy advocacy and cultural revitalization.

Kinetic Ideas: To alter public opinion, successful movements condense complex ideas and needs into easily digestible slogans. Once these have achieved broad social acceptance, they may need to be de-constructed for the movement to move toward full maturity.  Where such maxims become concretized and reified, the movement sets itself up for a future ideological backlash.

Multiple Pathways of Recovery: Rather than fight with each other over THE right way to recover, it is time to acknowledge what anyone with any observational skills and common sense has known for a long time: people with myriad patterns and circumstances surrounding their problematic relationships with alcohol and other drugs are finding diverse ways to initiate and sustain their resolution of these problems. It is time we celebrated the growing pluralism of the culture of recovery.

Cost of Recovery: The most important elements of sustained recovery–the commitment of self and the support from family, friends, and other recovering people–come without a price tag, and it is the nurturance and mobilization of those elements that are the primary mission of the new recovery movement.

One People, Many Voices, One Message: The long-term fate of this movement may hinge on its ability to tolerate differences and tolerate boundary ambiguity while forsaking calls to create a closed club whose exclusiveness would leave many suffering people refused entry at its doorway.  Somewhere in this movement’s maturation, a message of unification needs to be extended that psychologically and socially links the growing number of recovery groups and solo flyers into a community of shared experience that can transcend differences and allow it to speak powerfully on one issue: the very real hope for permanent recovery from addiction.  It is crucial that a way be found to transcend the internalized shame that turns members of stigmatized groups upon each other in frenzies of mutual scapegoating.  The most serious battles fought by this movement are best waged, not with each other, but with more formidable forces in the culture that seek to objectify, demonize, and sequester all those with AOD problems.

Changing the Face of Recovery: The faces of barely sober addicts on television screens need to be replaced by the faces of people from all backgrounds who have survived addiction to live full lives.  With no other disorder do we ask people in the earliest days of recovery to speak as if permanent recovery had already been achieved.  It is not that the floundering, newly sober celebrity is not welcome in the culture of recovery; it is that portraying this person as the culture of recovery is a gross misrepresentation of reality.  It is also a fact that thrusting individuals in the earliest stages of recovery into the limelight is to invite disaster for them as well as the movements they represent.

Language of Recovery: One of the challenges of the recovery movement will be how to reduce the stigma attached to a condition and those who suffer from it with a cultural language that is heavily laden with the stigma…. In the addiction recovery arena, two sets of language may be required–one for internal and one for external communications.

On Money: It is better to have an unfunded or under-funded movement than to have a well-funded movement whose mission is corrupted by the source or level of that funding. It is better to have the inception of a movement postponed than to have that birth prematurely induced by money that deforms its subsequent development.  Strategies of financial support that work in the short run can sometimes undermine a movement in the long run.  Movements can die from a lack of resources, but they can also die from the turmoil, restrictions, and diversions that resources can bring.  To the new generation of grass roots advocacy organizations I would say: Carefully heed the adage ‘he who pays the piper picks the tune’; find your own voice and sing only your own song. Be aware of seeking funding from any source that changes, no matter how subtly, your thinking, your vocabulary, your mission, or your methods.  Find a way to use money temperately to achieve your mission; money has no value and becomes destructive when it takes your “eyes off the prize.”  If you evolve into funded treatment agencies, you will have failed by professional absorption.

Risk of Premature Victory: There is danger that movements focusing on reducing stigma prematurely claim victory in the face of a positive media attention or sudden (but often superficial) shifts in public opinion. The fastest way to kill anything in America is to turn it into a superficial fad that dies from distortion and over-exposure…. The most insidious death of the recovery movement could occur if the essence of that movement died while the illusion of its continued existence remained.  This would be an invisible death–a death by value dilution and corruption.

Mission and Methods: Congruity: Social movements often go awry when their emerging methods conflict with their mission and core values. The means used by movements to achieve their mission must be congruent with that mission.  Recovery movements must be, above all, grounded in recovery values: honesty, simplicity, humility, gratitude, and service.

Inclusion/Exclusion: Before the recovery movement can confront stigma in the larger society, it must confront how that same stigma gets acted out as a destructive force inside the movement. Developing an inclusive recovery movement requires skills in cross-cultural communication, conflict resolution processes, and safe sanctuaries where healing and cross-cultural communication and relationship-building can occur….Movements that are created to advocate on behalf of the most disempowered often leave these very individuals behind as the focus of the movement seeks wider social acceptance.

Backlash: Movements that acquire visibility and influence often generate their own counter-movement. Once movements become visible on the cultural horizon, they become a target of those institutions whose interests they threaten.  The degree of success of any movement–the civil rights movement, the environmental movement, the gun control movement–cannot be fully ascertained until that movement has weathered the counter-movement that it generates…. Counter-movements germinate within the soil of a movement’s excesses.

Need for Recovery Research: The future of the recovery movement does not hinge solely on recent or future scientific data on the etiology of alcohol and other drug  problems/addictions.  It hinges on the emergence of a science of recovery extracted from the lives of those who have achieved such recovery.

I will leave it to my readers to judge how these earlies reflections have stood the test of time. The full paper is available HERE.