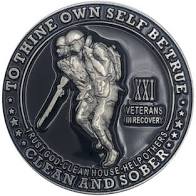 The problems men and women of the U.S. military experience upon re-entry to civilian life receive considerable research and media attention. Far less common is information on their resilience to and recovery from such challenges. It is in that context that a landmark study has just been published on the prevalence of recovery from alcohol use disorders among U.S. veterans.

Stefanovics and colleagues surveyed more than 1,200 veterans who had experienced an alcohol use disorder during their lifetimes as part of the National Health and Resilience in Veterans Study. This representative sample of U.S. veterans plotted current drinking patterns across three categories: abstinence, subthreshold (not meeting alcohol use disorder diagnostic criteria), or hazardous (currently meeting criteria for an alcohol use disorder). This research marks one of the most rigorous non-clinical studies of the trajectory of alcohol problems among U.S. veterans. Major study findings include the following:

This study has several important implications. First and foremost, findings offer considerable hope for veterans and their families affected by alcohol use disorders. Remission for AUDs is not just possible for veterans; it is the most likely outcome for AUDs.

Second, subthreshold drinking among U.S. veterans with past AUDs is a viable pathway to problem resolution that may be either sustained over time or migrate towards abstinence with increased age. This point suggests the potential for clinical strategies that support choice in treatment goals and the viability of both decelerating drinking and abstinence as pathways to AUD remission. Subthreshold drinking can also be followed by clinical deterioration and sustained AUD-related problems. This finding suggests the need for continued in-treatment and post-treatment monitoring, support, and, when indicated, re-evaluation of treatment goals and methods.

Rather than argue that subthreshold drinking in AUD is impossible, the addictions field would be well served by clearer delineations of those clinical populations that are most and least likely to achieve moderated resolution of AUD and subclinical alcohol problems, e.g., factors such as genetic liability, problem severity, medical/psychiatric co-morbidity, personal/family/community recovery capital, etc.

Hopefully, the Stefanovics’ study marks a shift in veterans research away from a near-singular preoccupation with pathology toward a focus on the prevalence and processes of veteran resilience and recovery.

For recent studies on moderated resolution of AUDs, see the following: